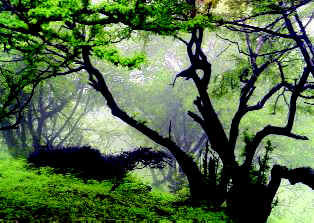 Coastal mountains in many parts of the world are obscured by clouds that are produced as humid onshore winds are pushed upward. On arid coasts, this can produce upland islands of mesic ecosystems sustained by “horizontal” or “occult” precipitation – the interception of cloud droplets by the vegetation. The stature and three-dimensional complexity of the vegetation would therefore be expected to have a direct influence on the amount of precipitation in the ecosystem. Hildebrandt and Eltahir have measured the occult precipitation (which was twice the amount of rainfall) in the seasonal cloud forests of the Dhofar Mountains of Oman and find that the immersion of the forest within the clouds expands the growing season from 3 months to half a year. They went on to model the climate-vegetation interactions and feedbacks; these dynamic simulations suggest that, for this system, any degradation of the forest canopy would lead to a reduction in precipitation sufficient to cut the feedback loop and cause a permanent conversion to grassland. — AMS.