Annual Fluctuations of the “natural” flow in the Nile at Aswan for the years 1872-1972.  El Niño events are marked with solid circles

In a recent study, Eltahir (1996) suggested that the natural variability in the annual flow of the Nile river is regulated to a significant degree by the variability in sea surface temperature (SST) of the Pacific ocean- a measure of El Nino- Southern Oscillation (ENSO). The following figure, taken from Wang and Eltahir (1999) describes the degree of coherency between the Nile flow and SST in the Pacific Ocean. 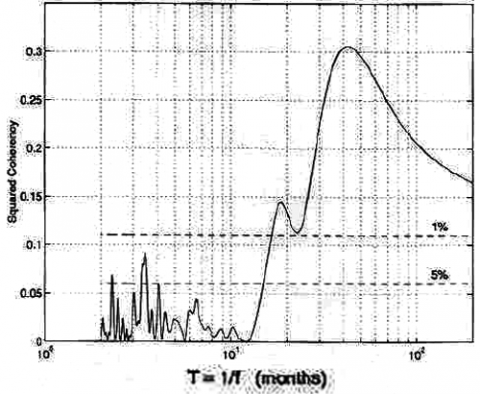 The squared coherency between ENSO index and the Nile River Flow.  The two dashed lines show 5% and 1% significant levels respectively.

Until recently, the lead time for forecasting the Nile floods was limited to less than the hydrologic response time scale: the time period between occurrence of rainfall over the Ethiopian Plateau and occurrence of stream-flow. For the Nile basin this response time is about one month. The following forecasting table, taken from Eltahir (1996), can be used for forecasting the Nile flood conditions, with a lead time of about six months. In March 1999, most models for forecasting ENSO predict a cold SST during the summer of 1999. Using this information we can almost rule out the possibility of a low flood in the Nile, six months ahead of the flood peak time in September.

Conditional Probability of the Nile Flood Given the SST Index of ENSO Based on observations of 1872-1972.