Malaria transmission is closely tied to climate. In West Africa, mosquito populations depend on the availability of water pools for breeding. The presence and persistence of these pools are tied to the region’s hydrology, as they are formed by excess rainfall and depleted by evaporation and infiltration into the ground. Temperature also plays an important role in malaria transmission, affecting the lifespan of the adult mosquito, the development rates of mosquito larvae, and the incubation period of the malaria parasite within the mosquito. 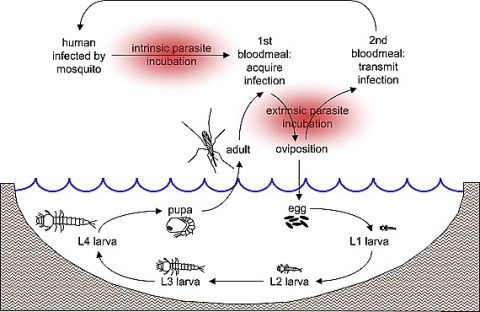 Currently, there are very strong north-south gradients in both temperature and rainfall, ranging from the very hot and dry conditions of the Sahara in the north to the cool and wet conditions in the south.

Current climate predictions from the Intergovernmental Panel on Climate Change (IPCC) agree that the mean annual temperature in this region will increase between 3 and 6 degrees Celsius. However, the predicted change in rainfall is highly uncertain and could be as much as +/- 300% in the driest areas.

Changes in rainfall and temperature predicted by the IPCC AR4 models for 2080-2099 using the A1B emmissions scenario. Each line is the zonally averaged output of a single climate model.

In this project, we are using these climate predictions to look at how the environmental suitability for malaria transmission will change as temperatures rise and the distribution of rainfall is altered. We use HYDREMATS to simulate transmission under current and future climates and identify areas that may be especially vulnerable to increases in transmission, as well as areas where transmission is expected to decrease.