Hydrological and climatological determinants of African anopheline habitat Within the semi-arid Sahel zone of Africa, serious malaria epidemics arise as a result of the annual wet season. We are studying the environmental determinants of malaria outbreak occurrence in this region with the aid of numerical modeling techniques. We are involved in an inter-disciplinary study to investigate the dependence of mosquito breeding and infection rates on factors such as surface water pooling which is the result of various hydroclimatological variables. In a unique approach, individual mosquitoes in a small study area in Niger will be modeled numerically in a simulation coupled with a small-scale hydrology model. Model input will include satellite-acquired remotely sensed data for vegetation, soil moisture and topography. With results validated by field investigations, variation in mosquito abundance and infection rates will be simulated. This numerical modeling tool will shed light on dynamics of outbreak occurrence and will help the targeting of intervention efforts.

Three years of weekly malaria prevalence data, obtained from the Niger ministry of health, and spans the entire country. Superimposed on this curve is GPCP average monthly precipitation data for the period 1979-2004, showing the strong response of malaria cases to the mosquito population explosion that inevitably follows extended pool persistence which mosquitoes use to breed. The peak of the malaria prevalence coincides with the end of the rainy season, most likely because mosquito populations can continue to grow up to this point.

A field site in the village of Banizoumbou, Niger, has been established joining the international team of scientists who are monitoring outbreaks of malaria and collecting measurements of the hydrologic cycle. More about the project can be found here. This research is sponsored by the National Oceanic and Atmospheric Association.

The potential for environmental management techniques to contribute to malaria vector control in Sahelian West Africa were investigated, with a case study on Banizoumbou village [Gianotti, 2008]. A numerical modeling investigation focused on methods that target the larval stages of the Anopheles gambiae s.l. mosquito by reducing the availability of larval habitat. The investigation used the hydrology component of the coupled hydrology-entomology model developed by Arne Bomblies and represents the first use of this model for the purpose of screening environmental management interventions for malaria control. The methods investigated in this study were chosen for their suitability to the local environmental conditions and vector dynamics, because they are low-cost and require very little materials or resources, and because they could be carried out by the residents of Banizoumbou in the long-term in a sustainable manner.

The model was used to simulate modifications to an ephemeral pool that forms every year to the southwest of Banizoumbou and is known to be a productive breeding habitat for the Anopheles gambiae mosquito. The modeling investigation showed that leveling of the topographic depression where the pool forms could reduce the persistence time to less than the time needed for establishment of mosquito breeding, approximately 7 days. Increasing the surface soil permeability by ploughing also reduced the persistence time of the pool but was not as effective as leveling. Given that topographic leveling appears to have a slightly greater impact, the model results suggest that leveling is the recommended intervention for pools that are of small to intermediate size (where leveling would not demand a burdensome level of time and effort to undertake). This study shows the potential utility of environmental management techniques to complement existing malaria control methods. 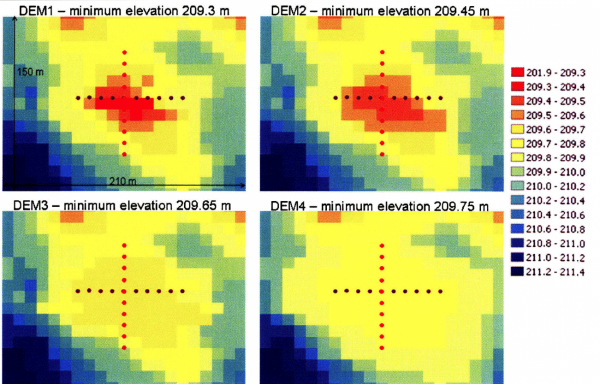 Persistence time and maximum water depth reached in the simulated pool during each pooling event of the 2005 rainy season, for each of the four DEMs. The results show that as the topography becomes flatter, the pool becomes shallower and less persistent, reducing its availability as a mosquito breeding habitat. 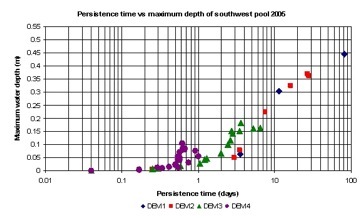