The inter-annual variability in the flow of the Nile river is strongly correlated with El Niño Southern Oscillations (ENSO) and its warm phase being associated with a reduced Nile flow (Eltahir, 1996). However, the mechanisms behind this correlation is not fully understood. The Indian Ocean plays a significant role in the connection between the Nile flow and ENSO, and in addition, it has an independent role from ENSO in shaping the natural variability in the flow of Nile River.

Figure 1: Correlations for the period (1871- 2000) between average Nile flow during (July to October) and average monthly SST: a) September and b) October.

Figure 1 shows a persistent and significant negative correlation  between the Nile flow and Sea Surface Temperature (SST) in the tropical Eastern Pacific and Indian Ocean. A mechanism that connects the Nile flow to SSTs in Indian Ocean and the Pacific ocean is investigated in this study (Figure 2). The increase of the SSTs over the North (NIO) and Middle (MIO) of the Indian Ocean, during El Niño events, forces a Matsuno-Gill circulation over these regions, which enhances westerly winds and reduces the convergence of air over the Upper Blue Nile (UBN) basin. Similarly the increase in SSTs over the South Indian Ocean (SIO) generates an anomalous cyclonic circulation that reduces the cross-equatorial southerly low-level flow and the associated convergence of air towards the UBN basin. This reduction in convergence of air is translated to a reduction of rainfall and runoff over the UBN basin. 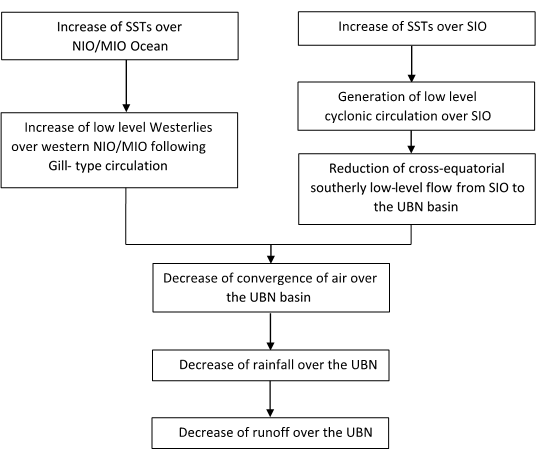 Figure 2: Schematic diagram showing the mechanism of the teleconnection between theIndian Ocean SSTs and Nile flow.