From radar studies and observations, it has been estimated that in dry environments between 20 and 50 percent of rainfall evaporates once falling from the cloudbase. When compared to observations, original simulations of RegCM3 over the Middle East contained large wet biases (on this order) in the Arabian Peninsula. Large annual overestimation of rainfall also led to substantially higher interannual variability than observations (CRU). 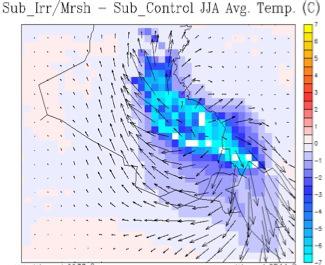 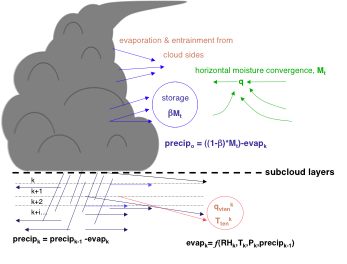 Schematic of modified Kuo scheme of Marcella and Eltahir, 2008.

In RegCM3, convective rainfall is assumed to fall through a nearly saturated atmosphere. However, in semiarid climates the atmosphere below the cloudbase can be extremely dry. Here we modified the Kuo scheme to permit rainfall to evaporate below the cloud based on the atmospheric layer’s physical properties [Marcella & Eltahir, 2008]. In addition, improvements were made to large-scale rainfall evaporation via changes made to the coefficient of evaporation. Now, model meteorology is used to calculate this value.

Over the entire domain, the simulations show significant response to the incorporation of subcloud layer evaporation. Encouragingly, those areas where RegCM3 most greatly overestimates rainfall (e.g. Zagros Mountains, Iran & Black Sea coast) are the same regions where large amounts of annual rainfall evaporate. As expected, the percent of the total rainfall that evaporates is most over the desert regions of the domain, namely the Syrian and Arabian deserts in the southern portion of the region. 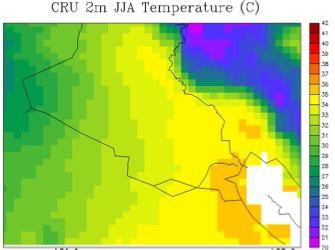 The effects of improving evaporation within RegCM3.  Positive values show increased drying in simulations including the subcloud layer evaporation (EEVP).  Values are absolute (mm) and percent difference in annual rainfall.

With the improved representation of rainfall evaporation in RegCM3, the model’s skill in simulating annual rainfall is substantially increased. As a result, nearly 20% of Kuwait’s annual rainfall evaporates, bringing model output within 15% of CRU observations. In addition, the yearly variability simulated by RegCM3 is improved by introducing the new representation of evaporation and using ECMWF’s ERA-40 dataset as lateral boundary conditions [Marcella and Eltahir, 2008]. 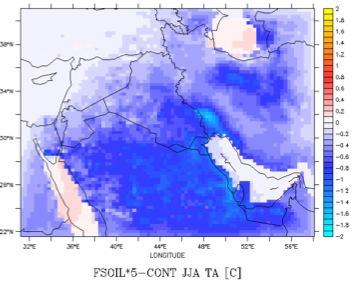