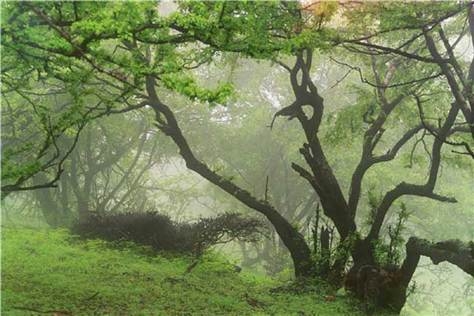 The region
Oman located on the Southern coast of the Arabian Peninsula is mainly a desert region. Besides some exceptions of which the coastal forest of Dhofar is an amazing example.
During summer the southern part of Dhofar receives moist monsoon air masses, which are traveling northeast towards India. From June to September the southern ridge of the mountains and the coastal plain are covered with clouds and drizzle rain is frequent. Merged in clouds a unique ecosystem has developed: dense forests with endemic trees and epiphytes are gathered around springs, waterfalls and little streams.
However the existence of the ecosystem is threatened. Livestock is overgrazing grassland of the coastal plain and also threatening the trees, of-road driving leads to soil compaction and increasing settlements disturb the fragile ecosystem.

The project
The aim of this pilot study is on the one hand to understand the different natural factors and study the human activities that influence on the ecosystem in Dhofar, as well as to develop strategies to prevent and combat desertification in the region.

As a first step we aim to understand the natural factors that shape the climate system Dhofar. For this part of the study we do not take into account the human influence on the system.
We analyzed data on the large scale climate, like sea surface temperature (SST), wind, pressure. We also studied local data from climate stations in Dhofar and along the Coast to the Arabian Sea.
An atmospheric model was set up for the region. The control runs are conducted at this point. Once the model is successful in representing the climate in Dhofar, it will be used to study the influence of large-scale climate on the Dhofar ecosystem. For example we will model the influence of the observed increase in Sea Surface Temperature of the Arabian Sea on the precipitation of Dhofar.
We also conducted an extensive literature research. Two excerpts of this research are included to this web-page: (1) a review about the climate in Dhofar and in Oman in general and (2) a review about ecosystems that are influenced by clouds (cloud forests).

As a second step we will take into account the influence of human activity on the system and finally we will investigate how the system can be managed in a way that prevents desertification and helps to conserve and probably reestablish the unique ecosystem of Dhofar.